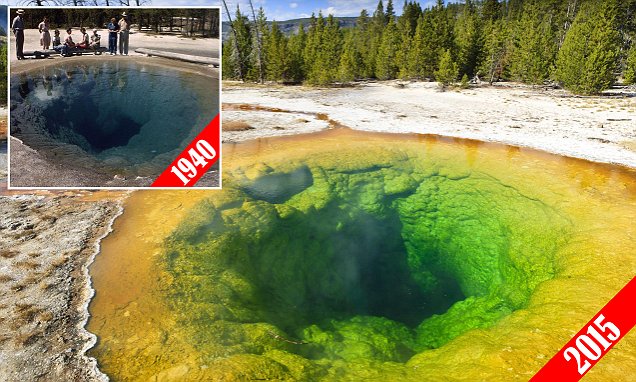 It may look like a stunning rainbow of colour, but the psychedelic hue of this hot spring in Yellowstone National Park, is a result of years of unintended vandalism by visitors.

Once a brilliant shade of blue, the Morning Glory pool’s appearance has altered dramatically since the 1950s, thanks to an accumulation of coins, rubbish and natural debris.

The pool has been dubbed the Fading Glory, due to the transformation from its original colour to the yellowy-green hue it has today.

Scroll down for video

Morning Glory in the Yellowstone National Park was once a brilliant shade of blue, but now owes its yellow tinge to debris and coins thrown in over the years

The Morning Glory hot spring in 1940. The photograph reveals a stark contrast to the fiery colours now exhibited at the tourist attraction

The popular tourist attraction sees three million visitors flock to gaze at its psychedelic waters in Wyoming, USA. The site first gained popularity in the 1940s when a million tourists would visit the site

Pool on fire! The fierce colours are influenced by how light interacts with the water’s depth, with yellow and orange colours in the shallows and green in the deep waters

The rainbow hot spring has been clogged up with debris, which block the heat vents, and affecting the water circulation in the pool

It is estimated that the destruction of the hot spring has been building up for decades.

Research by Montana State University and Brandenburg University of Applied Sciences in Germany helped to create a model that could depict the hot spring’s colours from over a century ago, when it was less frequented by visitors.

Now nearly three million tourists flock to Yellowstone National Park, compared to the one million in

As the underwater vents started to get clogged up, water circulation was affected, decreasing the temperature of the waters and causing a migration of the orange-coloured bacteria towards the centre.

Adam Hoffman from Science Friday said: ‘Pigments produced by swaths of those microbes—called microbial mats—are responsible, at least in part, for the brilliant yellows, greens, and oranges that now tinge Morning Glory and other thermal pools in Yellowstone.’

Photographs from 1966 show the Upper Geyser Basin pool’s original blue colour, before the build up of coins and rubbish

The pool received its name in 1883 from Mrs McGowan, who was the wife of Assistant Park Superintendent, Charles McGowan.

As a nod to its then crystal blue colour, she named it after the blue flower, Morning Glory.

Unless some subterranean shift happens where more hot water can again flow to the surface, Morning Glory will never be fully blue again

Half of the world’s geothermal features are in Yellowstone National Park , fueled by Yellowstone Caldera, the largest supervolcano on the continent

The pool has warning signs around it, in an attempt to reduce further vandalism to its waters, (left). It has been dubbed Fading Glory, now bearing little resemblance to the bright blue flowers which gave it its name, (right)

Confucius Quotes (Author of The Analects)