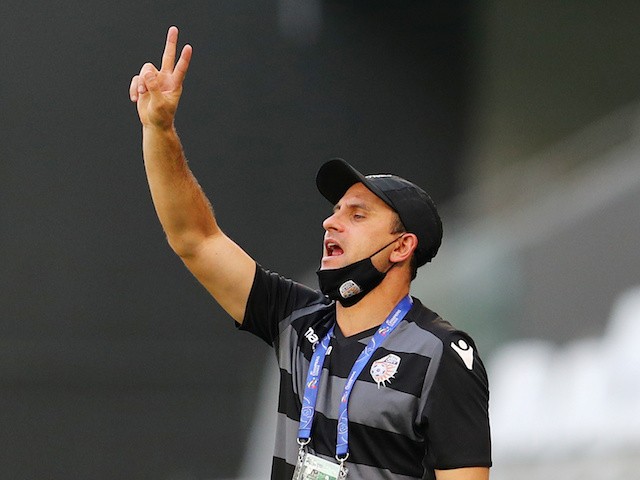 Central Coast Mariners will look to strengthen their position at the top of the Australian A-League table on Sunday, when they welcome Perth Glory to the Central Coast Stadium.

The league leaders will go in search of a third consecutive league win in this game, while Perth Glory will be looking to bounce back from two straight defeats, most recently suffering a 3-0 thrashing away at Wellington Phoenix.

Central Coast Mariners come into this game with a six-point lead over second-placed Melbourne City, although they have played a game more than the side in pursuit of the top spot.

That could not be more different to their campaign last season, when Alen Stajcic‘s side finished bottom, having picked up just 18 points from 26 top-flight games.

They have been fired to the top of the league this season with eight wins from their first 11 matches, most recently defeating Macarthur 2-0 thanks to goals from Matt Simon and Matthew Hatch.

Their position at the summit of the division is down to a strong combination of defence and attack, with no side netting more than their 20 goals, while only Sydney FC have shipped fewer than the 11 that The Yellow and Navy have conceded.

Before that recent victory, the Mariners travelled to take on Perth Glory, defeating Sunday’s opponents 2-1 thanks to another Simon goal alongside a Marco Urena finish.

Stajcic will be hoping to repeat that outcome here, as they take on the Glory for the second time in quick succession, and aim to stretch their lead at the top of the table to nine points with a win on Sunday.

However, the side from Perth will be desperate for a win of their own, having lost their last two games, seeing them drop to eighth spot.

In their last league outing, Perth Glory fell to a 3-0 defeat away at Wellington Phoenix, as Reno Piscopo, David Ball and Ben Waine all found the net to seal a comfortable victory for the hosts.

Before that, Bruno Fornaroli‘s goal was not enough to salvage a point in the 2-1 defeat to Sunday’s opponents in Perth.

Richard Garcia‘s side will be looking to reignite that run of form in this game, in the hope of moving back towards the top end of the A-League table.

Centre-back Lewis Miller could remain out for Central Coast Mariners, after he missed the win over Macarthur with an illness.

Midfielder Gianni Stensness could also remain out of action, having missed the last three games through injury.

Captain Matt Simon will be looking to extend his good run of form in front of goal, having found the net five times in his last six appearances.

Alou Kuol will be pushing for a starting spot on Sunday, with the 19-year-old registering six goals and two assists from 11 league games this season, with only four starts.

Perth Glory could remain without centre-back Mason Tatafu, who missed the last match with an ankle injury after playing the full game against Central Coast Mariners.

Richard Garcia could look to make changes to the side which was comfortably beaten by Wellington Phoenix, with the likes of Nicholas D’Agostino, Nick Sullivan and Carlo Armiento potentially returning to the starting lineup.

With the way they have started this season, it is hard to look past another Central Coast Mariners victory here, with the hosts gunning for a third consecutive league win on Sunday.

While the side from Perth will be desperate for a much-needed win to change their fortunes, Stajcic’s side should have too much for them in this encounter.

Our expert tipster partners at

are predicting a home win in this match.

to find out what else they are predicting for this game and for more of their tried-and-tested football tips.

Battle of Haifa-The glory story of Brave Rajput warrior who fought for Israel.

Glory To God In The Highest, Music For Mass