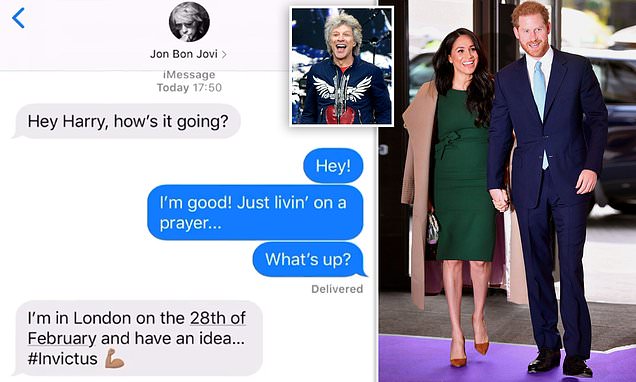 Going down in a blaze of glory! Prince Harry shares Jon Bon Jovi text exchange stunt on Instagram as he prepares to join the rocker and the Invictus Games Choir at Abbey Road for one of his final royal duties before Megxit

By Chloe Morgan For Mailonline

Prince Harry has shared an amusing exchange of messages with music legend Jon Bon Jovi to confirm their attendance to an upcoming Invictus Games event on February 28.

Taking to the Sussex Royal Instagram account, the duke, 35, shared a short video showing the fake texts between himself and the pop star, alongside the caption: ‘Coming soon…*Disclaimer – this is not a real text conversation*’

The conversation opens with Jon Bon Jovi asking Harry ‘how’s it going?’ to which the father-of-one replies with a witty reference to one of the star’s number one hits: ‘I’m good! Just livin’ on a prayer…’

Prince Harry, 35, took to the Sussex Royal Instagram account to share a witty exchange of messages with music legend Jon Bon Jovi – confirming their attendance to the Invictus Games event on February 28

In the amusing messages, Prince Harry can be seen making several references to the pop star’s hit song, Living On a Prayer

Jon Bon Jovi then goes on to inform Prince Harry he ‘has an idea,’ to which the duke questions whether his band will be in attendance too.

‘Just me for now, but don’t worry – I’ve got some back up that I think will work,’ he responds.

Quickly jumping in, Harry wittily quips: ‘Ha! Don’t expect me to sing…BUT I’ll give it a shot.’

The song will be recorded in Studio 2 at Abbey Road Studios, which was made famous by The Beatles who recorded 11 out of their 13 albums there.

During the conversation, Prince Harry asks the music legend whether his band will be in attendance, before joking he doesn’t expect to be asked to sing…but he’ll ‘give it a shot’

The song, called Unbroken, was created by Jon Bon Jovi to shine a spotlight on veterans living with Post Traumatic Stress Disorder and honour their service.

Jon has been a big supporter of the military for a long time as both his parents served in the U.S. Marine Corps.

The Invictus Games Choir, which is managed and delivered by Help for Heroes, is made up of wounded, injured and sick veterans and serving personnel from all branches and different ranks of the UK Armed Forces who come together and use the power of music to aid their recovery.

The Duke of Sussex arrives for a reception to celebrate the fifth anniversary of the Invictus Games at the Guildhall in central London on September 10, 2019

It celebrates the power of sport in recovery and how it can help, physically or psychologically, those suffering from injuries or illness.

The fifth Invictus Games will take place in The Hague in May this year, followed by Düsseldorf in 2022.

Upon arrival, The Duke will head into the recording studio where Jon will talk him through the single and how he has been working with The Invictus Games Choir.

He will then watch The Choir perform with Jon. Following the performance, the pair will meet members of the Choir followed by competitors from previous Invictus Games who have been invited to attend this special event.