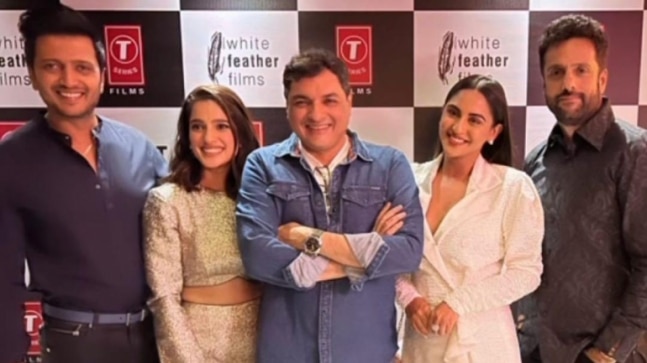 Visfot is the Hindi remake of Venezuelan film, Rock, Paper, Scissors. Riteish Deshmukh and Fardeen Khan recently wrapped up the shoot of the thriller film.

It’s a wrap for Riteish Deshmukh and Fardeen Khan’s Visfot.

Bollywood actors Riteish Deshmukh and Fardeen Khan have completed the shoot of their upcoming film Visfot, the makers announced on Wednesday.

Bankrolled by Sanjay Gupta’s White Feather Films and T-Series, the thriller is the official Hindi adaptation of the 2012 Venezuelan movie Rock, Paper and Scissors.

The remake, also starring Priya Bapat and Krystle D’Souza, is directed by Kookie Gulati, who most recently directed Abhishek Bachchan-starrer The Big Bull.

Gupta, known for films such as Shootout at Lokhandwala and Kaabil, thanked the entire team for meticulously executing the movie.

“Kookie, Riteish and Fardeen, and the entire cast and crew ensured we had a smooth run. By far, it’s been one of my most chilled-out projects ever planned and executed meticulously.

“The team had everything in control and I pride myself in them, and in the film, they

have put together, without any delays and hiccups,” the 52-year-old filmmaker said in a statement.

Gulati expressed gratitude to Gupta and Bhushan Kumar of T-Series for showing trust in him with the film.

“I also have to thank the team for being cooperative and ensuring that everything falls into place and runs smoothly. Riteish, Fardeen, Krystle and Priya have been phenomenal as actors, especially Fardeen who was facing the camera after so long,” Gulati said.

The shooting of Visfot commenced late last year and was completed a few days ago, following all safety protocols.

Click here for IndiaToday.in’s complete coverage of the coronavirus pandemic.