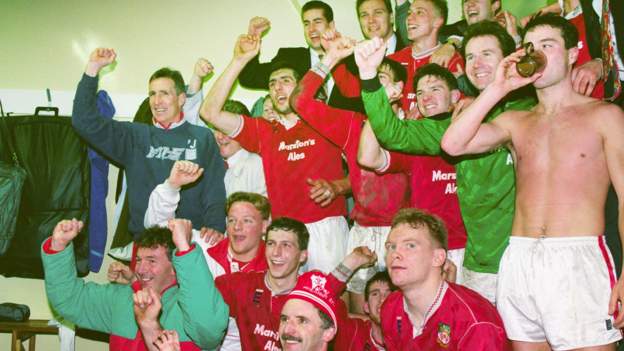 “History only tells the story – we are here to see your glory.”

Wrexham FC’s story has plenty of highs and lows, glory and despair during its 156 year history, with many twists and turns that would not look out of place in a Hollywood movie.

It’s no wonder that two Hollywood stars – Ryan Reynolds and Rob McElhenney – have been captivated by this historic and much loved north Wales club and are now its owners.

The story of their involvement is now unfolding, but the story that precedes them makes for an interesting script.

Steeped in industrial history, the town of Wrexham was the birthplace of the Football Association of Wales in 1876, founded following a meeting at the town’s Wynnstay Hotel.

But a football team in the town had been formed some years earlier.

Members of the cricket club wanted something to keep them occupied over the winter months and a football side was founded at another of Wrexham’s hostelries – The Turf – in October 1864.

Wrexham won the inaugural Welsh Cup in 1877 and to this day are the most successful team in the competition’s history – winning it on 23 occasions.

Their early years were spent in regional English leagues before the club was elected to the newly formed Third Division North of the Football League in 1921. 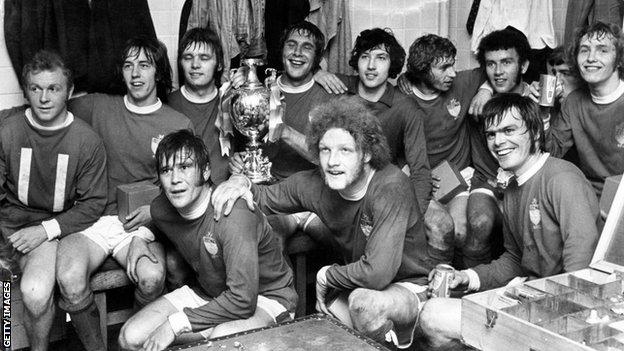 But that was to all change with the appointment of John Neal as manager in 1968.

Neal transformed the club and within two years Wrexham had been promoted to the Third Division and a Welsh Cup win in 1972 secured European football for the first time the following season.

Neal’s side beat Zurich in the Cup Winners Cup first round before bowing out to Hajduk Split on away goals and before long Wrexham were making their mark their mark in domestic Cup competitions.

Middlesbrough, Crystal Palace and Southampton were beaten as Wrexham reached the FA Cup quarter-finals for the first time in their history in 1974

The FA Cup was not the only competition in which Wrexham would reach the Quarter finals.

Two years later, on another European odyssey, they would be rubbing shoulders with some of Europe’s best, including Anderlecht, whom they eventually lost to.

But promotion to English football’s second tier eluded them and Neal left in 1977 to be replaced by long standing player Arfon Griffiths.

Griffiths would lead Wrexham to further Cup exploits, reaching the last eight of the FA Cup and League Cup but crucially promotion as Third Division champions.

The late seventies were heady days in this corner of north east Wales with Wrexham playing to packed crowds at the Racecourse.

But the eighties would see a steady decline. Financial problems led to players being sold and two successive relegations saw Wrexham back in Division Four.

Amid the gloom came a rare highlight in 1984.

Wrexham, had again reached Europe via the Welsh Cup and were paired against Portuguese giants Porto, beaten finalists in the previous season’s Cup Winners’ Cup

Having won the home leg 1-0, Wrexham found themselves trailing 3-0 at a rain sodden Estadio das Antas but two Jake King goal brought them level on away goals.

Porto regained the lead and looked to have secured a place in the next round but a late goal from a young Barry Horne earned a famous win on the away goals rule.

Bobby Roberts’ side would lose to AS

Roma in the following round and it would be back to the bread and butter of life in Division Four.

Former player Dixie McNeil returned as manager and would also lead the club on an European adventure, only losing to Spanish side Real Zaragoza on away goals.

Life was tough in the Fourth Division and although McNeil guided the club to play-offs in 1989, there was to be disappointment against Orient.

McNeil departed a few months later and replaced by former Welsh international, Brian Flynn. The struggles would continue and in his first full season in charge Wrexham finished rock bottom. 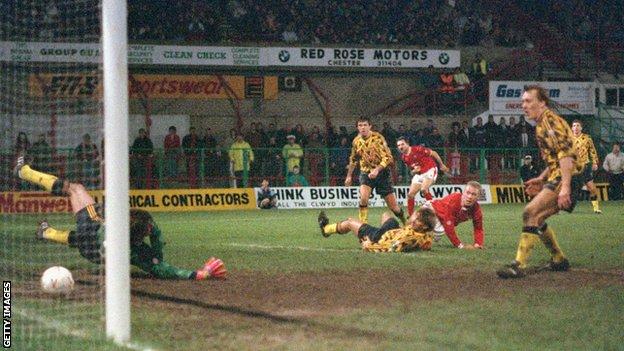 Wrexham reached the FA Cup third the following season and the team who finished bottom of the Football League were drawn against the reigning First Division champions, Arsenal.

Arsenal’s star studded side looked to be coasting, leading 1-0 at half-time

What happened late in the game has become the stuff of legends. Mickey Thomas’ free-kick and Steve Watkin’s late goal earned a famous win and with it changed the club’s fortunes.

Flynn had put his faith in a number of youngsters and with a number of experienced heads they achieved promotion in 1993.

There were further FA Cup scalps under Flynn. Ipswich in 1994 and then West Ham and Birmingham were beaten during a famous run to the quarter-finals in 1997.

Flynn’s 12 year reign came to an end in 2001 and new manager Denis Smith could not rescue the club from relegation that season, although promotion was achieved at the first attempt.

Relegation coincided with changes off the pitch too and new ownership with the long serving Pryce Griffiths stepping down and Mark Guterman, a former chairman at bitter rivals Chester City at the helm.

What was not known at the time was involvement of another man, Alex Hamilton.

He took over as chairman from former business associate Guterman in 2004 and by the end of that year the club had gone into administration with debts of over £3m.

Wrexham, warned Hamilton, would have to sell its Racecourse ground and move to a new stadium. But fans were vehemently opposed.

Entering administration would have dire consequences on the pitch too as the Football League imposed a 10-point penalty and the club were relegated in 2005. 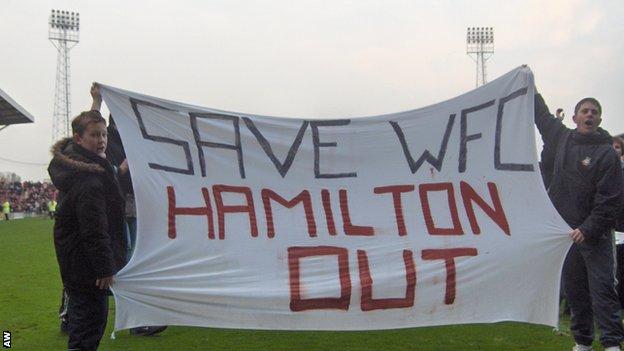 There was a battle on two fronts – on and off the pitch.

The club’s very existence was at stake as fans stepped up their protests against Hamilton’s plans. A High Court ruling ultimately ruled in favour of the club’s administrators, Hamilton was defeated and the club was sold.

On the pitch there was also a battle for survival – to stay in the Football League.

Wrexham beat Boston United on the final day of the 2006-07 season to survive but the following season they would suffer relegation to non-league after 87 years in the Football League.

The Dragons re-adjusted to life in the Conference with the backdrop of club ownership still rumbling on and after several suitors expressed interest, Wrexham Supporters Trust took control in 2011.

The fan-owned club was rewarded with a first trip to Wembley two years later as they became the first Welsh club to lift the FA Trophy but a Football League return has eluded them thus far.

Reynolds and McElhenney will inherit a club with a great story, experienced plenty of dramas and with some exciting storylines still to come.