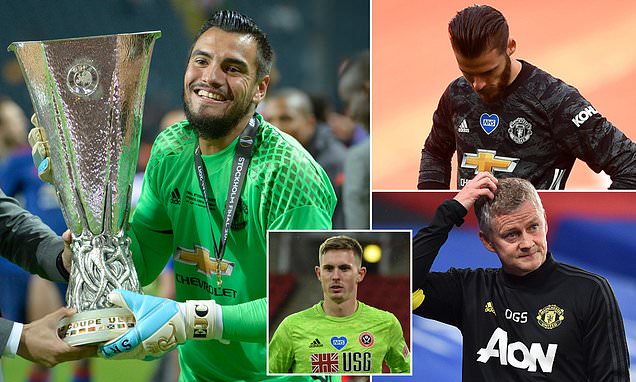 The goalkeeping situation at Manchester United is the problem that has regularly kept rearing its ugly head at various points of a rollercoaster campaign for the club.

First-choice keeper David de Gea has endured an extremely underwhelming season littered with high-profile errors and many have questioned whether his powers are already on the wane even before his 30th birthday.

Moreover, he could face competition from the returning Dean Henderson next season after spending the previous two campaigns on loan at Sheffield United, even if the jury remains out on whether his shoulders are broad enough to deal with the pressure just yet at Old Trafford.

However, perhaps the most intriguing challenge to the goalkeeping hierarchy comes from Sergio Romero, who has been biding his time as first choice in the cup competitions.

And ahead of United’s Europa League quarter-final against Copenhagen on Monday evening, the dilemma will once again be on Ole Gunnar Solskjaer’s mind as United aim to take another step towards repeating their European heroics of 2017.

It was during United’s victorious Europa League campaign three years ago under Jose Mourinho that Argentine Romero first properly showcased his talent between the sticks, having joined from Sampdoria in 2015.

He played all but three of United’s 15 games in the competition that season, including the 2-0 victory against Ajax in the final in Sweden as United clinched their sixth European title.

But Romero’s success – particularly towards the latter stages of the competition – brought little reward in terms of sustained opportunities to challenge De Gea for the number one spot, making just two Champions League appearances the following season and playing just a single Premier League match.

The 33-year-old however will be hoping that second time is really the charm, having made 16 appearances for United in all competitions this season, with half of those coming in the Europa League.

Romero has conceded just twice in those eight appearances, and despite being seemingly out of position for Club Brugge’s Emmanuel Bonaventure’s opener in Belgium in February, he had no chance of stopping LASK skipper Philipp Wiesinger curling an effort into the top corner at Old Trafford on Wednesday.

And having seen De Gea flop on several occasions this season and criticised heavily from all spheres as a result, Romero could take not only another step to a second European medal but also get his big chance to add to the competition for the No 1 jersey next season by performing well in Germany against the Danish outfit.

The doubt that may however linger in Romero’s mind can be traced back to the events of the FA Cup semi-final at Wembley last month.

Romero had looked assured between the

sticks in the FA Cup, having played all the fixtures leading up to their Wembley showdown against Chelsea and conceded only Todd Cantwell’s stunner as United beat Wolves, Tranmere, Derby and Norwich to reach the last four.

But Romero cut a frustrated figure as he was benched against Frank Lampard’s side, with salt rubbed into the wounds as he watched on and saw his Spanish replacement allow a routine-looking Mason Mount drive escape his grasp after being questioned for his role in Olivier Giroud’s opener.

The pressure on 29-year-old De Gea following the game – which had come after he conceded another sloppy goal to Tottenham forward Steven Bergwijn in United’s first game following the Premier League restart – remains to this day.

Having played in all of the games before the Chelsea showdown, Romero was dropped

Solskjaer admitted in his press conference leading up to the Copenhagen match that he will struggle to keep all his goalkeepers happy, with rumours of Henderson’s impending return also having intensified since the Spaniard’s Wembley nightmare.

‘We have Dean, Sergio and David at the moment in the ranks. Lee (Grant), the fantastic professional he is, backing them up. But it’ll be difficult obviously to keep three of them at the club, so we’ll see what the decision will be there.’

The decision is likely to be in some part determined by their ability to convince Henderson to accept a new and improved deal as leverage in convincing him to return to Sheffield United next season before taking the reins from de Gea.

However, it appears that for the remainder of this season at least, the shootout for the famed United jersey could well determine whether United win their first trophy since their victory against Ajax in Solna.

However, having almost single-handedly surrendered the chance to take another step towards matching Arsenal’s then record of 13 FA Cups last month, Solskjaer could be reticent to displace Romero again in Germany in favour of de Gea without the slightest hint of guilt.

But if the FA Cup is the blueprint Solskjaer is looking to employ for the remainder of the eight-team tournament in Germany this week, Romero may well see his dual hopes of further glory and a challenge for the no.1 jersey taken out of his hands.