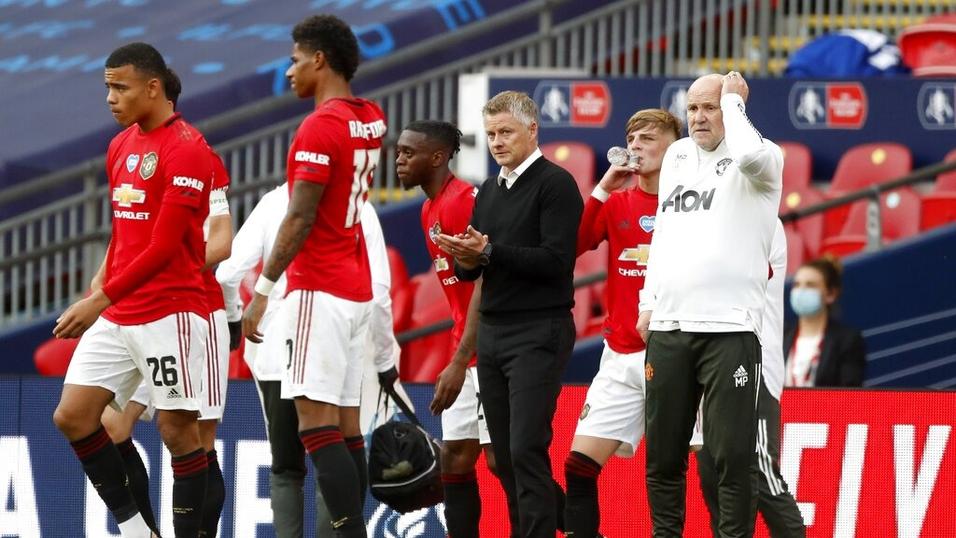 Solskjaer counting on United’s past to inspire future glory Manchester United’s manager Ole Gunnar Solskjaer (third from right) stands on the touchline as his players return to the pitch during the English FA Cup semifinal soccer match between Chelsea and Manchester United at Wembley Stadium in London, England, July 19, 2020. (ANDY RAIN/  / POOL PHOTO VIA AP)

Manchester United’s current crop of players should look at the club’s tradition and rich history to inspire them on their own journey to success, manager Ole Gunnar Solskjaer has said.

United have won a record 20 top-flight titles but have failed to get their hands on the Premier League trophy since the departure of manager Alex Ferguson in 2013.

We want them (the United players) to learn about the traditions and history of the club and what the players before them have done.

Solskjaer’s third-placed side, whose starting XI this season have the lowest average age in the Premier League, travel to Leicester City on Sunday for a game that could determine whether they qualify for next season’s Champions League.

before them have done,” Norwegian Solskjaer told Sky Sports.

“The club’s former players have played so many vital games at the end of the season – a cup final, a game to win the league, a game to get into the Champions League.

“The players now are learning what the other players through history have been through. Marcus Rashford or Mason Greenwood, they’ve been in the academy for so many years and seen so many players doing this before them, so it’s great learning.”

United are third on 63 points, above Chelsea courtesy of a much better goal difference. They are also one point ahead of fifth-placed Leicester heading into the final game of the season knowing a draw will guarantee Champions League football.

READ MORE: Manchester United will be ‘100% fresh’ for Leicester clash

Although two draws in their last three league games have left United still chasing a top-four spot, Solskjaer believes his side are well placed to secure a Champions League berth.

“We hoped to arrive at the last game of the season needing to beat Leicester to go past them – I think I said that quite early, maybe in January,” the United boss said. “That was the aim and we’re here now.”