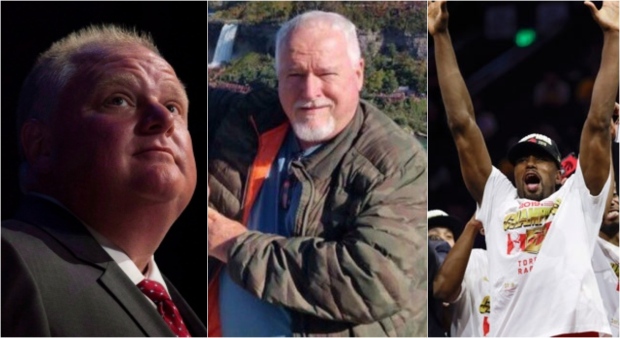 TORONTO —
As we reach the end of another decade, CTV News Toronto has compiled a list of stories that have touched this city.

Some of these stories have left us grieving, while others have caused laughter and celebration.

We’ve captured it all these past 10 years.

In no particular order, here’s our list of the most read and talked about stories from 2010 until 2020. The Toronto Raptors made history in June 2019 after they dethroned the Golden State Warriors and won the franchise’s first-ever NBA championship.

The big win shook the entire country, but the epicentre of it all was in Toronto, where a massive celebration parade brought millions of people to the city’s downtown core. The city was left in shock when police revealed in January 2019 that a man named Bruce McArthur had been charged with first-degree murder for the deaths of Selim Esen and Andrew Kinsman, who had been reported missing months before.

In a chilling turn of events, investigators soon learned that the 67-year-old landscaper was allegedly responsible for six more deaths related to missing persons, and that he had buried several of his victims remains in planters at a home where he worked as a gardener. Toronto was caught off guard in 2012 when an infamous coat-wearing monkey, only seven months old, was found strolling around an Ikea parking lot in North York.

Shoppers in the area told CTV News Toronto that they first thought the stylish monkey was just a display, until it started darting around and screaming to their shock. Greif enveloped the city when ten people were killed and more than 15 were seriously injured after a van mounted a curb in North York and struck numerous pedestrians on April 23, 2018.

Richmond Hill resident Alek Minassia, 26, was arrested in connection with the attack. In an interview released recently, the accused suggested to police that a lack of attention from women is what pushed him to take action. Peel Regional Police activated an amber alert for 11-year-old Riya Rajkumar just after 11 p.m. on Feb. 14. The alert was cancelled just over an hour later when the little girl’s body was found inside a residence in Brampton.

Her 41-year-old father, Roopesh Rajkumar, was arrested during a high-risk takedown, and had been charged with first-degree murder. Residents in Toronto felt a whirlwind of

emotions when former Toronto Mayor Rob Ford died on March 22, 2016. After years of scandal helped raise him to celebrity status, the long-time Toronto politician died at the age of 46 due to a rare and aggressive form of soft tissue cancer.

One of his most controversial escapades erupted in 2013 when the Toronto Star and Gawker printed a story detailing a video in which Ford appears to be seen smoking crack cocaine.

DEATHS OF BARRY AND HONEY SHERMAN Pharmaceutical giant Barry Sherman and his wife Honey Sherman were found dead under mysterious circumstances in their mansion at 50 Old Colony Road on Dec. 15, 2017.

At the time of the initial investigation, police sources said the prevalent theory in the case was that it was a murder-suicide. But, about six weeks after the Shermans’ deaths, homicide detectives said they believed the Shermans were the victims of a targeted double homicide. A young woman and young girl were killed and 13 others were injured after a mass shooting on The Danforth on July 22, 2018.

Investigators named Faisal Hussain as the man who opened fire on Toronto’s busy Danforth Avenue, and said he shot himself after a confrontation with police. Residents in Toronto sprung to action after learning that the dead body of a large racoon was left on a sidewalk downtown.

Torontonians quickly built a memorial shrine for the dead critter made up of cards, flowers and even a framed photo. The shrine received international attention after it was posted on Twitter. Former NDP Leader Jack Layton died just weeks after he announced that he was fighting a new form of cancer, and just months after leading his part to its most successful federal election in history.

The 61-year-old leader died on Aug. 22, 2011, and his state funeral brought thousands of people across Canada to Toronto’s downtown, with some people waiting in line for hours to pay tribute to his memory. Toronto was one of the cities across Canada to welcome hundreds of Syrian refugees in 2015 and 2016. A number of organizations sprung up across Toronto and the Greater Toronto Region to provide services and support for the newcomers.