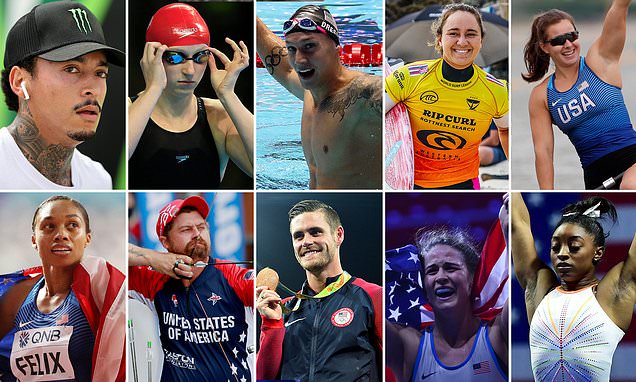 After an extended wait due to the coronavirus pandemic, athletes from the United States of America are finalising their preparations ahead of the Olympic Games in Tokyo this summer.

US stars across all Olympic sports are no strangers to gold medals at the Games, and they will once more harbour ambitions of helping the nation top the charts once more.

Sports data company Gracenote even predicted last month the US would once again lead the way this year in Tokyo, tipping them to win 114 medals – albeit a decrease of seven from Brazil – and 43 golds to put them ahead of China.

But who are the members of Team USA who are likely to star in their respective disciplines and attempt to lead their country to that mark?

Where else could we start, really?

The 24-year-old reigning world and Olympic champion – as her current titles suggest – has not looked back ever since her senior debut in 2013, the last time she tasted an all-round defeat, and continues to set the pace for female gymnasts.

She now has her eyes set on breaking records, some of which she narrowly missed out on in Rio five years ago. She will become the first woman since 1968 to win back-to-back Olympic all-around titles with victory in Tokyo.

A slip on the balance beam denied her the chance of winning five Olympic golds (team, all-around, vault, floor and beam) in a single Games in 2016, but in just her second Games she will attempt to rectify that bittersweet competition in Rio.

She looked far from rusty when she competed for the first time in more than 18 months in Indianapolis in May, and few would bet against her creating more history in Japan this summer.

Another athlete who will be aiming for five golds in Tokyo following the introduction of the 1500m freestyle to the Olympic programme.

Her medal return at her first and second Games has been phenomenal, following one gold aged 15 in London with four more in Rio when she had still not entered her twenties.

Her quartet of golds in 2016 included winning the 800m freestyle by an incredible 11.38 seconds, contributing to her success as the first woman since compatriot Debbie Meyer in 1968 to win the 200m-400m-800m treble at a single Games.

Katie Ledecky won the 800m freestyle by an incredible 11.38 seconds as one of four Rio golds

She was slowed by a stomach bug or virus at the last world championships in 2019 before the pandemic hit, leaving her, in her own words to the Wall Street Journal: ‘Swimming in a lane by myself for over a year now’.

Such a lonely and exhausting training schedule may have had some negative effects, but little appears capable of halting her dominance in the 1,500m. She won her first of three world championship 1,500m titles in 2013, and has broken the world record five times.

And should Ledecky pull off the most incredible of performances across all distances this summer, she would rise above former Russian gymnast Larisa Latynina as the female with the most Olympic Gold medals, and sit in second behind American male swimming legend Michael Phelps.

In another sport that debuts as an Olympic women’s discipline in Tokyo, 19-year-old Nevin Harrison will be looking to mark yet another successful chapter in her early career.

Harrison suffered hip dysplasia and her sprint track career was brought to a grinding halt five years ago, but that did not diminish the Olympic spirit within her.

She became the first American woman to win a world title in a sprint canoe or sprint kayak event, with her victory coming in the 200m at the 2019 world championships.

Now Harrison – hailing from Seattle- could become the first Olympic champion from the 50-state nation in sprint canoe or kayak since Greg Barton won two gold in Seoul in 1988.

Mental and physical battles have come to dominate the 32-year-old’s career ever since winning silver on the 10m platform at Rio in 2016.

Boudia considered retiring following the Games and took a break in 2017 from international competition and went into real estate, only to decide to test himself at a fourth Olympics.

But then he suffered concussion after jumping from a three-storey building and crashing into the water head and stomach-first during a training dive accident in February 2018, an incident which forced him to switch to the 3m springboard.

He was then ‘out cold’ for a nearly two days after contracting coronavirus last year, and during lockdown had no access to a pool and instead had to rely on outdoor mats to ensure he retained his flipping ability.

Eager to return once facilities had opened back up again Boudia had successful surgery in September for a sports hernia and partial adductor release, which he claimed was caused by coming back too soon and pushing himself too hard.

But having full recovered and training once again coming to a head,  the spring is metaphorically back in his step at least and there is the chance of making history even if he does not manage to replicate his Gold medal feat from London 2012.

A fifth career Olympic medal in Tokyo would move him level with Greg Louganis for most ever by an American diver, and with an athlete who has described adversity as his ‘best friend’, there will be plenty of excitement that he can do just that after a demanding few years away from the board.

When it comes to the Olympics circuit,

there is very little that Allyson Felix has not achieved in a career that has spanned the best part of two decades.

No female track and field athlete in history can match her six Olympic golds, the latest of which came in the 4x100m and 4x400m relays in Rio, having achieved her very first with a silver in Athens 17 years ago.

She has however switched her focus to the 400m in more recent times and ran her fastest time since 2017 in her first race running that distance since 2019 in Texas in May.

Such speed and drive in a race following a traumatic pregnancy which threatened her and her baby’s life in 2018 as well as the impact of Covid has ignited a steely determination inside her.

Now, at her fifth and what she says will be her final Games, she required two medals to become move above Carl Lewis and become the most decorated US Olympic track and field athlete ever.

The sport debuts as a medal event in Tokyo this summer, and while no one has ever won gold in the discipline before, millionaire Nyjah Huston will be targeting just that.

The gold medal favourite in men’s street, Huston has four World Skateboarding Championship golds, making him already one of the most established skaters of his generation.

He also has a mind-blowing 7.6m combined followers across the main social media platforms, with 4.6m of those on Instagram alone, to go with an approximated net worth of $12m.

The fame – which also includes Nike SB, Monster Energy drinks, Doritos and Mountain Dew as a handful of multiple sponsor – has come after a tumultuous upbringing, but which saw him introduce to a skateboard aged four.

But now 22 years on, he has the chance to top all of his previous 41 wins at various events and competitions since 2010 as the first skater to ever win Olympic gold.

Read Sportsmail’s profile on Huston ahead of this summer’s Olympics.

After the astonishing achievements of Mark Spitz and Michael Phelps before him, Caeleb Dressel is the new man in town and is ready to take the Olympics by storm for America in the swimming pool.

The 24-year-old has already come to the party on a few occasions in his career, amassing seven gold medals in Budapest in 2017 to equal Phelps’ world championships record.

He then went on to record eight medals in Gwangju, namely six golds and two silvers, two years later.

Caeleb Dressel is seen by many as the heir to Michael Phelps, who won 23 Olympic gold medals

An all-rounder who tends to clean up at the sprint freestyle, butterfly and medley events, it is unlikely Dressel will not draw huge attention amid all the comparisons to 23-gold medal winning champion Phelps.

But having beaten and equalled records in the 50m and 100m in recent years, Dressel will hope Tokyo is just the start of his attempts to create a swimming legacy of his own.

Read Sportsmail’s profile on Dressel ahead of the Games.

A four-time world champion already, Carissa Moore will hope to make her impact on the Games in the most dramatic way possible as surfing makes its Olympic bow.

Hailing from Honolulu, the 28-year-old will lead a team including teenage sensation Caroline Marks – the youngest surfer to ever qualify for the women’s championship tour – into their first Games 40 miles outside of Tokyo at Shidashita Beach.

But having become the World Surf League champion in 2011, 2013, 2015 and most recently two years ago, it is Moore who is an early favourite to sweep medals in Tokyo given her dominance in the sport.

Moore already has a day named after her in Hawaii, with every 4 January now ‘Carissa Moore Day’ in her home state. You are almost left wondering how she will be celebrated if an Olympic gold is placed around her neck this summer.

The Olympic gold is often see as the final piece of the jigsaw for many athletes, and that is certainly the case for Brady Ellison.

The 32-year-old managed to reclaim World No 1 status before the pandemic in the Netherlands, becoming the first American to win an individual world recurve title since Rick McKinney won his third and last title in 1985.

The last time American however to win Olympic archery gold was Justin Huish in Atlanta a quarter of a century ago.

The three-time Olympic medallist came closest to matching Huish’s feat with silver team medals in London and Rio, but never has he managed to break that final barrier. But with World No 1 status back in his hands, Tokyo represents a great opportunity.

Gray dominates her division domestically and on the world stage as a five-time world champion, the first wrestler from the USA to do so.

But that hegemony has not quite transferred to the Olympic Games, where she has suffered heartbreak rather than any sort of happiness.

She failed to qualify for London 2012 and then when going well in Rio she suffered a shock quarter-final defeat to Belarussian Vasilisa Marzaliuk in the freestyle 75kg event.

But after spending the following year recovering from injury, she bounced back with a historic fifth world champions medal in 2019, and now will aim to become just the second-ever American woman to win Olympic gold after team-mate Helen Maroulis.