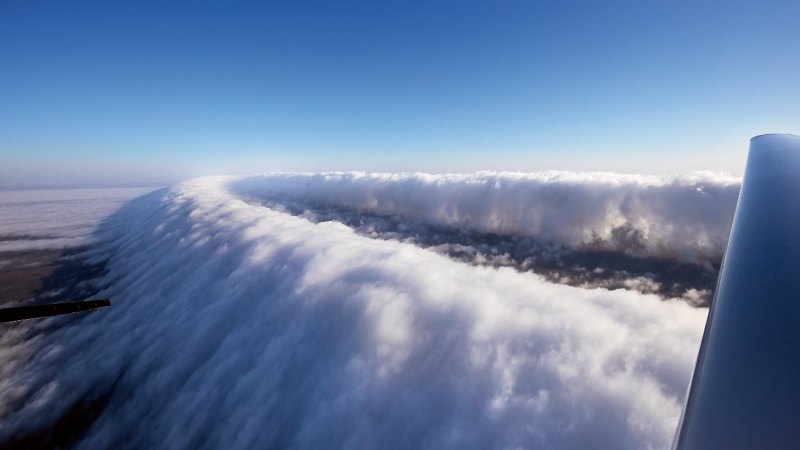 “As that cloud moves along it generates a big area of rising air in front of it, so once you’re up in the air you can turn the engine off and just ride the waves of the cloud,” Mr Zupanc said.

“The cloud itself is essentially a wave, basically the same as a wave at the beach.”

“We were flying in gliders and flying on a [cloud] wave, the same way a surfer would at the beach.

“Each year, the phenomenon occurs on and off around the world, but Burketown is the only area in the world where it is predictable.

“Glider pilots travel there en masse in the season to fly the waves.

“It’s visually spectacular, those clouds can be 1000 kilometres long and you can fly right along them.”

Mr Zupanc said because he was in a two-person glider, he could let go of the aircraft controls long enough to capture breathtaking images.

He has been back several times since to photograph the phenomenon over Burketown and gone up in a single-seater open-top glider.

“You don’t have to hold the [glider] controls grimly, you can let go. I have been in a two-place and open-top aircraft, which makes a better camera platform because you can just let go of the controls.”

told months ago his picture would feature in the weather calendar and he could only share the good news with his wife because of a strict embargo, which lifted on Wednesday.

Fellow Queenslander Mal Brewitt’s spectacular still of a lightning bolt striking the Brisbane CBD skyline means his work will feature in the calendar for February. 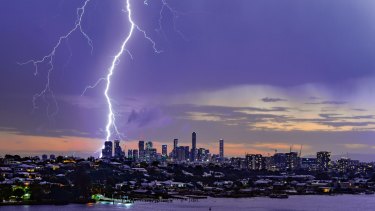 Another awe-inspiring Brisbane storm produced the goods for one local photographer.Credit:Mal Brewitt – Supplied

He captured the sight from his apartment in the riverside suburb of Hamilton and titled the work Window to the Sky.

“As they were building up in the west, I set up my equipment on my back deck and waited for them to come through,” Mr Brewitt said.

“Fortunately, on this occasion, the storm came right across the CBD, so I was able to watch it unfold throughout the afternoon.

“That afternoon I took maybe 400 photos and there were five or six that were really good.

“This was a particularly good storm, lots of lightning and to capture the city in the background was incredible.”

Toby Crockford is a breaking news reporter at the Brisbane Times

Most Viewed in National