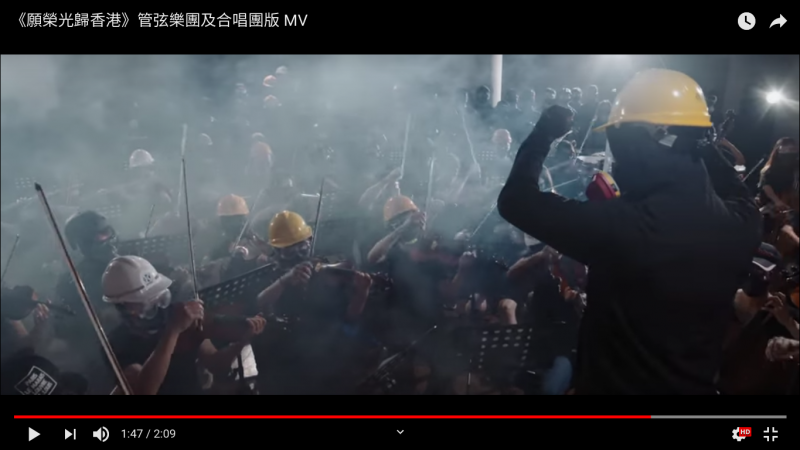 The following post is the English version of a Chinese feature story published on the Stand News, a Hong Kong independent news outlet, published on 11 September 2019. It is published on Global Voices under a content partnership agreement.

1 October is the 70th anniversary of the People’s Republic of China. While the Hong Kong government is preparing for the official ceremony, tens of thousands of Hongkongers are performing a new protest song in the streets and in shopping malls across the city.

The song, “Glory to Hong Kong”, has been dubbed Hong Kong’s anthem by netizens and many different versions have been circulating online. Below is a classical orchestra presentation of the protest song presented by a group of Hong Kong musicians and artists dressed as protesters:

The song was first released to the public on 31 August and went viral soon after as the lyrics captured the sentiment and spirit of the protests [Note: The English version below is copied from the officially released translation]

We pledge: No more tears on our land,
In wrath, doubts dispell’d we make our stand.
Arise! Ye who would not be slave again:
For Hong Kong, may Freedom reign!
Though deep is the dread that lies ahead,
Yet still, with our faith, on we tread.
Let blood rage afield! Our voice grows evermore:
For Hong Kong, may Glory reign!
Stars may fade, as darkness fills the air,
Through the mist a solitary trumpet flares:
“Now to arms! For Freedom we fight, with all might we strike.
With valour, wisdom both we stride!”
Break now the dawn, liberate our Hong Kong,
In common breath: Revolution of our times!
May people reign, proud and free, now and ever more,
Glory be to thee, Hong Kong!

The composer behind the city’s anthem is a local musician in his twenties known simply as “Thomas”. He is a member of a local band, and although he has composed many pop-rock songs before, this is his first classical piece.

The idea behind the song was to create a piece that could capture the spirit of Hong Kong protesters and united them. The composer looked to other national anthems and battle music, including Battle Hymn of the Republic and Gloria in Excelsis Deo, as a reference for his song.

On 26 August, Thomas released his demo on the

Reddit-liked LIHKG forum, inviting users to give feedback.  He amended the melody and lyrics such as adding protest slogan “Liberate Hong Kong, Revolution of the times” and asked LIHKG members to help recording the song. Three days later, more than 20 LIHKG members appeared at a studio for the recording.

Through the song, the composer wants to deliver the following message:

Hong Kong people is now in a battle in defense of people’s conscience, justice and freedom. It will be a long battle and the battlefield is not restricted to the streets, nor in the Legislative Council over a certain law. It is about people’s values and morality. Hong Kong people are no longer defined by utilitarian interests, there is something more important than money and even above life.

Thomas has taken part in a majority of the protests over the past two months but he was not on the front lines. He sees music as his best protest weapon:

Music is a very important tool. In former USSR, the government had strict control over music because it knew that music could connect people’s hearts and touch people more effectively than words, slogans and images.

Since its initial release, tens of thousands of people have participated in flash mob performances in major shopping malls all across Hong Kong. Below is one of the performances at TaiKoo City Plaza on 9 September:

When the Chinese national anthem was played at the World Cup qualifier match against Iran on 10 September, it was booed. During a break, Hong Kong football fans sang “Glory to Hong Kong” instead:

Free pdf books download free Someone Who Will Love You in All Your Damaged Glory: Stories (English Edition) by Raphael Bob-Waksberg