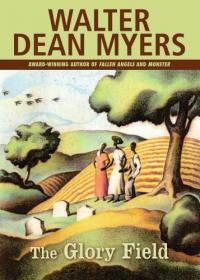 This detailed literature summary also contains Topics for Discussion and a Free Quiz on
The Glory Field by Walter Dean Myers.

The Glory Field by Walter Dean Myers is the story of an African-American family. Beginning with the capture and enslavement of young Muhammad Bilal in 1753, The Glory Field journeys from the shores of West Africa to Curry Island, South Carolina. The saga of the captive Lewis family begins on the Live Oaks plantation in 1864. Their tradition, their story as a part of America, begins with a pair of heavy iron shackles.

Each part of The Glory Field takes place at specific points in American history. The individual lives of the characters contribute to a tapestry that is rich in meaning and profound in its message of perseverance and dignity.

In 1864, fourteen year-old Lizzy must leave Live Oaks and the people she loves after she is beaten by a merciless overseer. Lizzy knows nothing of the world outside the paths and cabins of the great plantation and her adventure begins under the cover of night. The ones she leaves behind rely on their faith and the power of their love for Lizzy to see her through to safety and freedom.

Three decades after the American Civil War ends, it is Lizzy’s son, Elijah Lewis, who must next flee Curry Island in fear for his life. Elijah, though, is certain that he will

someday return to the Glory Field.

Elijah’s proud and determined daughter Luvenia chooses to make a life for herself in Chicago in the 1930s. After she is fired from her job as a domestic, Luvenia must ask herself if the price of freedom is worth the risk of striking out on her own in the big city.

Luvenia’s nephew Tommy is a star basketball player who dreams of a college career in an integrated school. Tommy is a teenager during one of the most volatile times in American history: the Civil Rights movement of the early 1960s. A small demonstration in downtown Johnson City, South Carolina irrevocably and permanently changes Tommy Lewis’ view of the world. And young, talented Malcolm Lewis receives an unexpected surprise when he visits the Glory Field and helps young and old bring in the last sweet potato harvest.

Each character’s journey is fraught with its own challenges and turmoil as the descendants of Muhammad Bilal find their way through life. After the Civil War ends, the family is given an eight-acre parcel of land that they call The Glory Field. The land is called The Glory Field in celebration of the family’s triumph over slavery and the strength of their love for one another.

From generation to generation, the Lewises make their way in the world with unshakable determination, solid faith in God, and a collective commitment to seeing one another through no matter what life may bring.

a flesh-and-blood history of the Society of Jesus (Book, 1999) [WorldCat.org]