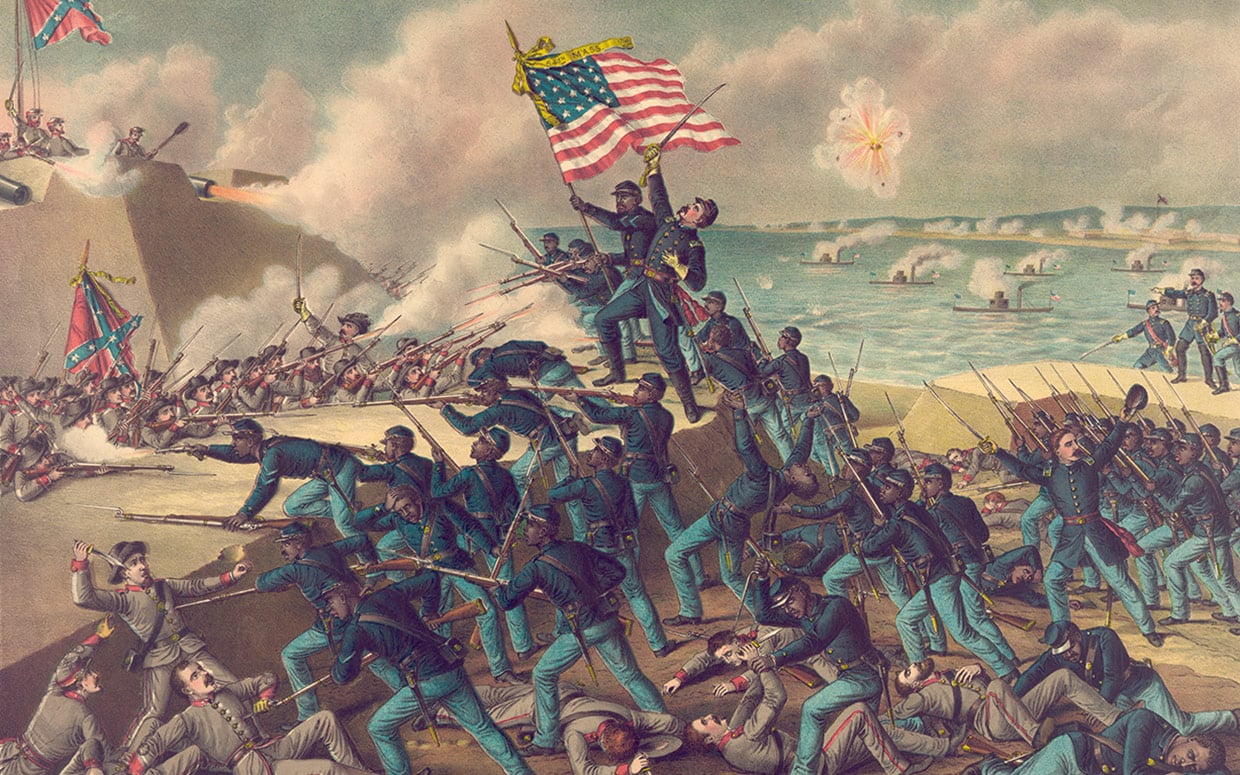 Sergeant William Harvey Carney of the 54th Massachusetts Colored Infantry carried the flag in the assault on Fort Wagner, on July 18, 1863. Severely wounded twice, he was awarded the Medal of Honor 37 years later for his valor in this battle.
(Library of Congress)

In Steven Spielberg’s Lincoln, an African American corporal, played by David Oyelowo, recites a chunk of the Gettysburg Address to its author, President Abraham Lincoln. Never happened. But the scene highlights an oft-forgotten fact about the Civil War: More than 180,000 African American soldiers (and roughly 19,000 sailors) fought for the Union in a segregated branch of the military, the United States Colored Troops (USCT). Another 200,000 black civilians—men and women—dug trenches, hauled away the dead, cooked meals, and performed other such gritty jobs.

Remember the movie Glory, from way back in 1989? Denzel Washington and Morgan Freeman portrayed soldiers of the 54th Massachusetts Infantry Regiment—a unit of free African American volunteers—commanded by a white officer, Colonel Robert Gould Shaw (Matthew Broderick). The film dramatizes the fateful assault on Fort Wagner, a Confederate bastion on Morris Island, S.C. Now this actually happened. On July 18, 1863, Colonel Shaw led the charge of 600 men under withering fire against the well-protected battery. Shaw was slain early in the assault, and 256 soldiers were wounded, captured, or killed. Says historian John David Smith, “The Confederates considered the black soldiers to be insurrectionists and their white officers inciters of slave revolts, so they refused to respect the Yankees as soldiers. Accordingly they dumped their dead bodies in a pit.”

This was a miserable, bloody rout for the Union. And yet, it was a pivotal event for the United States military and American society. We asked a number of USCT experts to share their perspectives on the legendary engagement and its historical significance.

How did the performance of the 54th at Fort Wagner affect debates about the fitness of black troops?

Elizabeth D. Leonard:African American men had attempted to volunteer for military service on behalf of the Union from the very start of the war, but they had been turned away repeatedly, for a variety of reasons. These reasons included white northerners’ concerns that allowing blacks to enlist and serve might demoralize or enrage white soldiers, upon whom they believed northern victory would depend, and who initially understood their task to be the restoration of the Union as it was, not the destruction of slavery with its potential for leveling the playing field between black and white Americans. In keeping with prevailing stereotypes at the time about blacks’ fundamental inferiority, white northerners also questioned black men’s ability to become good and reliable soldiers, to withstand the terrifying pressures of battle, to demonstrate courage.

An unidentified African American soldier in Union uniform and Company B, 103rd Regiment forage cap. The 103rd was organized at Hilton Head, S.C., in March 1865. (Library of Congress)

In 1862, Union military policy began to change, largely in response to manpower shortages, which enabled the formation of the first black units. Still, these units were often provided with inferior equipment and clothing, and were deployed mostly for garrison duty and for labor in support of the white soldiers who were expected to perform all combat roles. The stunningly courageous performance of the 54th Massachusetts at Fort Wagner—and of other black units in other settings in the summer of 1863—changed all this. By the end of July 1863, it was no longer possible for whites to insist that black soldiers could not be counted on to fight as well and as bravely as white ones. This realization extended from President Lincoln himself down to the common soldier in a white regiment, and out into the public as well. Their contributions were absolutely essential to Union victory.

John David Smith: The determination of Shaw and his men raised the consciousness of northerners, white and black, to the possible value of black soldiers in President Lincoln’s army. They could be trained and would fight hard and often bravely. Over time many whites considered the men of the USCT competent soldiers, even comrades. Many white northerners welcomed blacks risking their lives instead of whites to defeat the Confederates. Few white northerners, however, welcomed the prospect of black men as their social or political equals.

For their part, Confederates refused to acknowledge the black troops as soldiers.  They threatened to re-enslave captured former slaves, enslave free blacks, and execute their white leaders. Historians know of cases of extreme brutality by Confederates who refused to allow the men of the USCT to surrender or to take black troops and their white leaders as prisoners. They murdered them instead. In most cases, however, the Rebels incarcerated them.

Most broadly, the successful recruitment, mobilization, and military service of almost 180,000 black soldiers proved that blacks could fight and fight well, that they were committed to freeing their fellow blacks still enslaved in the Confederacy, and were committed to help to restore the Union. Beyond this, the blacks’ military service emphasized black agency, the determination of African Americans to be treated as free men worthy of full citizenship, dignity, and respect.

An unidentified USCT soldier, likely from a Maryland regiment, with his wife and children. (Library of Congress)

the story of the USCT’s valor at Battery Wagner. What other USCT stories need to be told?

Ludger K. Balan: Glory was a great catalyst to raise awareness about the 54th, but it should be noted that it was not the first African American unit—there were the Kansas Colored Troops, for instance. Being a New Yorker, I take great pride in honoring the 20th, 26th, and 31st USCT, the three black units that were raised in New York City, at Rikers Island and Hart Island (which then served as military training bases). They comprised about 4,500 free black men from all walks of life and of diverse African heritage, not only from New York State but from across the Americas and beyond.

EDL: In fact, by the end of the war approximately 175 regiments of black soldiers had been in service. Many of these regiments were engaged in battles that contributed in crucial ways to the defeat of the Confederacy, and not just in the eastern theater of the war.

It would do us good as a culture and a society to pay more attention to the important and heroic work that black soldiers performed at places other than Fort Wagner: at Port Hudson and Milliken’s Bend in the summer of 1863, for example, in conjunction with Grant’s ultimately successful campaign to force the surrender of Vicksburg, and, a year later in Virginia, during the siege of Petersburg. We could benefit from learning more about each of the 16 black men who earned the Congressional Medal of Honor during the war, and about the experiences, courage, tenacity, and dignity of the tens of thousands of United States Colored Troops who, as white soldiers mustered out after Appomattox, remained on very dangerous occupation duty with their units in the angry and unreconstructed South.

I think many—perhaps most—Americans still tend to “remember” the Civil War overwhelmingly as a clash of white men against other white men, and I would suggest that truncating the story in this way has troubling implications for how we understand ourselves as a nation and a people.

In the final analysis, what’s the historical significance of this single, storied engagement?

JDS: One battle does not make a war, but the 54th’s famous assault at Battery Wagner gave Americans north and south, white and black, a clear message: Black men would fight, fight hard, and sacrifice their lives for the twin cause of freedom and the Union.

Elizabeth D. Leonard is the John J. and Cornelia V. Gibson Professor of History at Colby College, in Waterville, Maine. She is the author of Men of Color to Arms! Black Soldiers, Indian Wars, and the Quest for Equality (2010) and Lincoln’s Forgotten Ally, which won the prestigious Gilder Lehrman Lincoln Prize in 2012.

John David Smith is the Charles H. Stone Distinguished Professor of American History, University of North Carolina at Charlotte. Dr. Smith has written and edited many books, including Black Voices from Reconstruction, Black Soldiers in Blue, and Lincoln and the U.S. Colored Troops (due out in November).

Ludger K. Balan is a founding member of the 26th USCT reenactors, based in New York City. He and his men take part in an array of Civil War reenactments, living history programs, and ceremonial events to honor the troops and to keep their legacy alive.

Ready to Take Your Pushups to the Next Level? Try Doing Them on a BOSU Ball—Your Core Will Thank You

Should Your Kids Do Chores? We Asked the Experts and TBH, Their Answer Might Surprise You

15 Easy Chicken Recipes to Shake Up the Routine