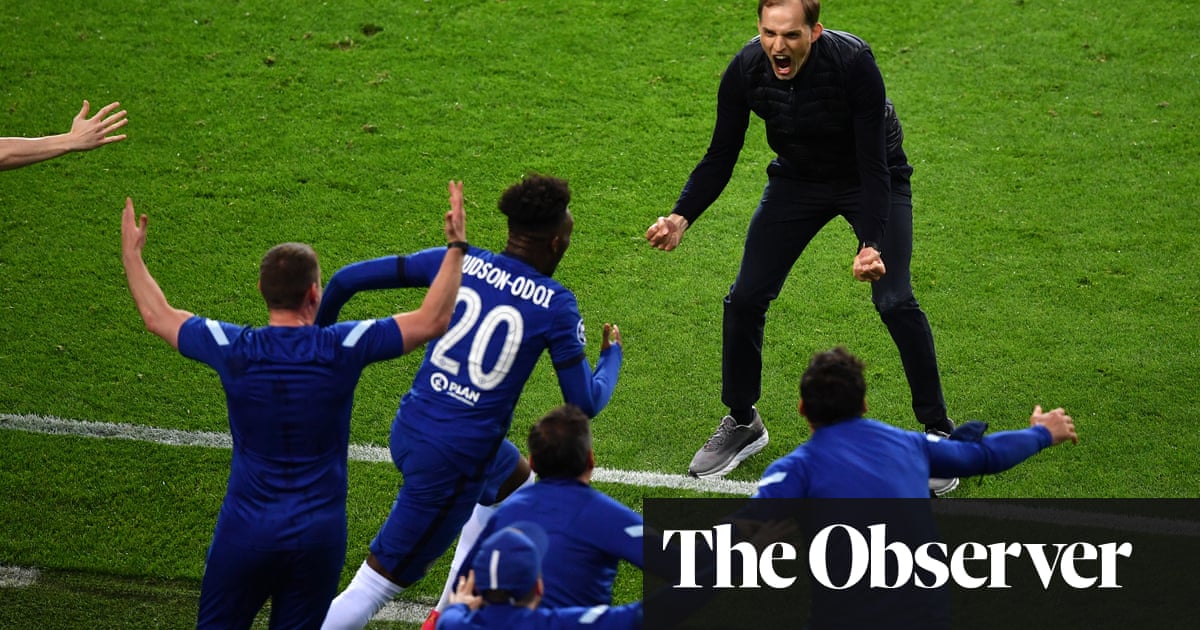 Thomas Tuchel is close to signing a new contract after leading Chelsea to European glory with a classy victory over Manchester City in the Champions League final at the Estádio do Dragao on Saturday.

Chelsea plan to reward Tuchel by handing him an extension to 2023 with the option of a further year after a fine goal from Kai Havertz dashed City’s hopes of winning the Champions League for the first time. The Premier League champions struggled to respond after Havertz opened the scoring just before half-time and it ended up as a night of regrets for Pep Guardiola, who was left to rue his lineup and tactics.

Tuchel won the strategic battle with Guardiola and the German’s contract, which runs out next summer, will be extended. The Chelsea manager, who spoke to the club’s owner, Roman Abramovich, on the pitch after full-time, was given an initial 18-month deal when he replaced Frank Lampard at the Stamford Bridge in January and he wants to commit his future to the club.

“I am not even 100% sure maybe I have already a new contract now,” Tuchel said. “My manager said something about it. Let’s check this first. I spoke to the owner right now on the pitch. It was the best moment for the first meeting. It can only get worse! We will speak tomorrow. We will speak later. I will stay hungry for the next title. My desire is for more victories ands to grow as a coach. It would be nice to meet him a bit closer. We are in contact. Now it’s nice to meet him.”

Tuchel, who was fired as Paris Saint-Germain’s manager last December, has made a stunning impact since joining Chelsea. Yet the former Borussia Dortmund manager is hungry for more success after helping Chelsea become European champions for the second time in their history.

“It’s a huge experience and a huge success. We all will profit from th at experience. We we will

use it to stay hungry and to grow and evolve. It;’s a huge step to arrive in the final and an even bigger one to fight your way through. Manchester City was a strong opponent. We knew it was a top level performance. We needed a strong bond today to win this match.”

Guardiola, who has not won this competition since 2011, was criticised after leaving out Fernandinho in midfield and naming Raheem Sterling in an attack-minded team. Ilkay Gündogan struggled in defensive midfield. “I had quality players,” City’s manager said. Gündogan played many ways this position. He had the speed to find the quality players between the lines. This was the decision.”

Did Guardiola have any regrets? “I don’t know. The decisions I made, the players did everything. The decision was to try to win the game. I think the game was exceptional.”

Tuchel was surprised by City’s lineup. “We expected Fernandinho in the lineup to start,” he said. “He chose a very offensive lineup. A very, very technical lineup. It was hard to steal the balls. Everything else we more or less expected. We were sure we needed to play with a strong bond and a genuine belief. It was a tough match.”

Although City ended the season as Premier League champions and also won the Carabao Cup, Guardiola must now decide if he needs to strengthen this summer. City are interested in signing Harry Kane from Tottenham.

The Fiver: sign up and get our daily football email.

“I’m not clever enough to think about next season,” Guardiola said. “It was a season with 62 games. It was difficult in a pandemic world. We are sad. We have to learn from this. The season was exceptional. They did everything. They give everything. Unfortunately we could not win but we will come back strong.”

It was pointed out to Havertz that he repaid his £62m fee with his goal. “To be honest right now, I don’t give a fuck about that, we won the fucking Champions League,” the German said.

Guardiola was unsure about Kevin De Bruyne’s condition after the Belgian went off with a head injury in the second half.