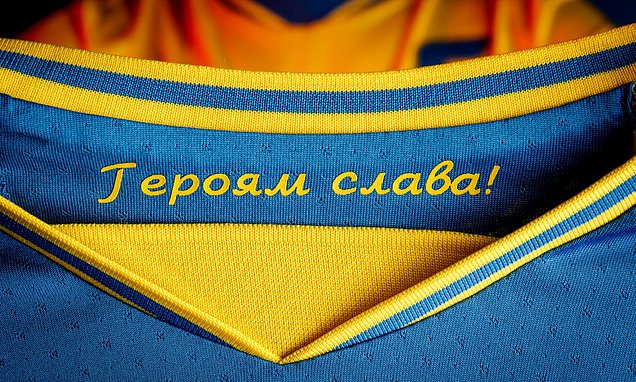 UEFA sides with Russia and orders Ukraine to remove ‘political”http://www.dailymail.co.uk/”Glory to our Heroes’ slogan from their Euro 2020 shirts

By Ross Ibbetson For Mailonline and Afp

UEFA today sided with Russia and ordered Ukraine to remove a ‘political’ slogan from their Euro 2020 football shirts.

European football’s governing body said the message ‘Glory to our Heroes’, a rallying cry during the 2014 anti-Russia protests in Ukraine that is written inside the jersey, was ‘clearly political in nature’.

Both sides immediately seized on the ruling, with the Ukrainian football association claiming it was ‘in talks’ to reverse the decision, while Russia hailed it as a victory following its furious complaint after the jersey was unveiled on Sunday.

Kremlin spokeswoman Maria Zakharova wrote: ‘Sport is not a battlefield, rather it is a field for competition. Become sporting heroes and you will have glory. Do it that way and not with nationalist slogans.’

UEFA said that ‘Glory to our Heroes’, a rallying cry during the 2014 anti-Russia protests in Ukraine that is written inside the jersey (pictured), was ‘clearly political in nature.’

The shirt has a map including Russian-annexed Crimea which Moscow considers it part of Russia. But UEFA said the map would not need to be changed because a United Nations General Assembly Resolution ‘recognises the territorial borders as broadly depicted by the design’

But Ukraine’s football chiefs told AFP that ‘earlier UEFA had approved the new kit and every element of it, including the slogan.’

On Tuesday, Russia sent a letter of complaint to UEFA over the yellow jersey which also features the outline of Ukraine including Crimea, which was annexed by Russia in 2014.

But UEFA said the map would not need to be changed because a United Nations General Assembly Resolution ‘recognises the territorial borders as broadly depicted by the design’.

The slogan ‘Glory to Ukraine’ was

also approved by UEFA as ‘on its own (it) may be considered as a generic and non-political phrase of general national significance’.

That chant was used by protesters who ousted a Kremlin-backed leader during the Maidan demonstrations seven years ago.

The revolt was condemned by Moscow and sparked a crisis in ties between the two countries.

Russia annexed Crimea and supported Russian-speaking insurgents in Ukraine’s east in a bloody civil war that has claimed more than 13,000 lives.

Tensions were further rattled in April when Vladimir Putin sent thousands of troops, tanks and warships to Ukraine’s eastern border.

It prompted calls from Washington and the EU for Russia to stand down amid fears of an invasion into the Ukrainian mainland.

Ukraine’s new strip was unveiled by the head of the Ukrainian football association Andriy Pavelko on Sunday, just days before the start of the tournament on Friday.

The Crimean peninsula is shown at the bottom right of this map, surrounded by the Black Sea

Dmitry Svishchev, a member of the Russian parliament’s lower house, denounced the Ukrainian uniform as a political gesture designed to draw sports into politics.

‘It’s setting the stage for a conflict using the uniform,’ he said. ‘Sports arenas aren’t for political declarations.’

‘They can dream about what they want,’ Valuev said, ‘but Crimea is part of the Russian Federation and it’s not up for discussion.’

Ukraine and Russia both qualified for the 24-team tournament but a UEFA rule in place since 2014 to separate the two countries’ national teams and club teams prevented them from being drawn together.

The tournament draw also prevents Ukraine and Russia from facing each other in the round of 16.

Russia will host seven Euro 2020 games in St. Petersburg. None will involve Ukraine.