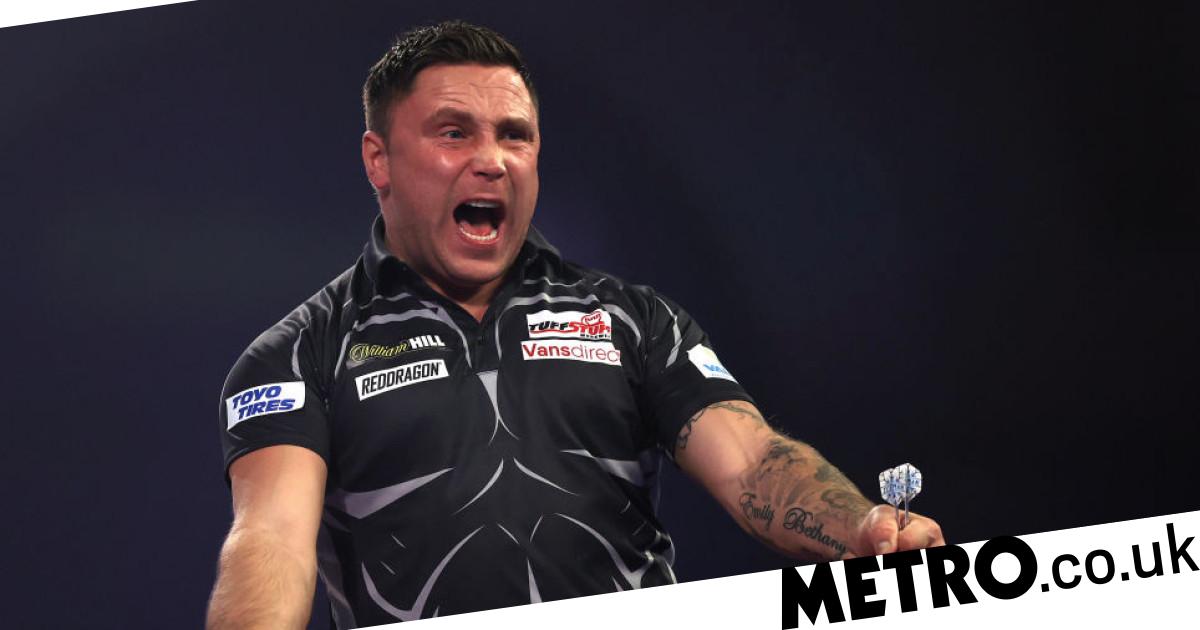 Gerwyn Price has hailed Jonny Clayton as the ‘most in-form player on the circuit’ and feels the Ferret is the man to beat at the UK Open this weekend.

The UK Open is played from Friday to Sunday this weekend in Milton Keynes and the usual suspects of world champion Price, defending champion Michael van Gerwen and former champ Peter Wright are among the favourites.

Clayton is now not far behind that trio in the betting, though, after his shock win at the Masters was followed up with three finals in four days at the Super Series in February.

The Welshman won one of the quartet of events and was runner-up in two more, which has led to Price saying his World Cup teammate is in the hottest form of anyone in the game.

Two other winners of Super Series event, Raymond van Barneveld and Joe Cullen, also got a nod from the world champ, but Clayton has been pinned as the man to beat.

‘Fair play to Jonny (Clayton), he’s been in great form this year. To reach three finals over the weekend takes some doing,’ Price told Ladbrokes.

‘Wales is in such a good place at the moment for darts. Jonny is playing fantastically well, Nick Kenny is as well. Jon Worsley’s got his tour card back, and obviously Lewis Williams as well – he beat Michael van Gerwen last week. So there are five of us who are flying the flag at the moment for Wales.

‘But going back to Jonny, he’s flying at the moment. Hopefully if he comes up against me this weekend he loses some of that form!

‘Raymond van Barneveld is back and full of confidence after a year away so whoever he draws is going to be in for a tough time of things. He’s looking dangerous.

‘Joe Cullen is looking fantastic, too. He’s played some great darts this year, as is Jonny Clayton in terms of ones to watch this weekend. Jonny is the most in-form player on the circuit right now he’s the one to beat.’

Price himself is looking to win the UK Open for a first time after twice finishing as runner-up, most recently last year when he was beaten by Van

Gerwen in the final.

His own trip to the Super Series was disrupted by illness and is still not in peak condition, but is looking forward to a tournament he performs well in.

‘I had to pull out of the Super Series last weekend because of a problem I’ve had with my ear and to be honest it’s still not 100%,’ he said. ‘I’m on stronger antibiotics now though and I’ve got some spray so fingers crossed I’ll be in better shape by Friday.

‘I tend to do quite well in the UK Open as well; I got to the final last year and slipped up against Michael van Gerwen. I’m playing well though; obviously I wasn’t at my best in the Super Series but there’s reasons for that. Hopefully I’ll get back to 100% match fitness before Friday so I can have another good run.’

Clayton feels he has as good a chance as anyone this weekend after his sparkling form of late and he will be bounding into the Marshall Arena full of confidence.

‘My darts are going good. So why not? The Welsh Ferret is going to try his hardest there,’ he said after his Super Series triumph at the weekend.

‘Sometimes I play and I think, “that didn’t feel good”. I look, and it’s 96 [average], and I’m thinking “I might be doing something right”. It’s a good feeling.

‘My consistency is starting to creep up. I know I’ve got the game. Just to keep that consistency going up. It’s a good start [to 2021].’

For more stories like this, check our sport page.