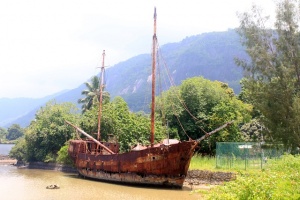 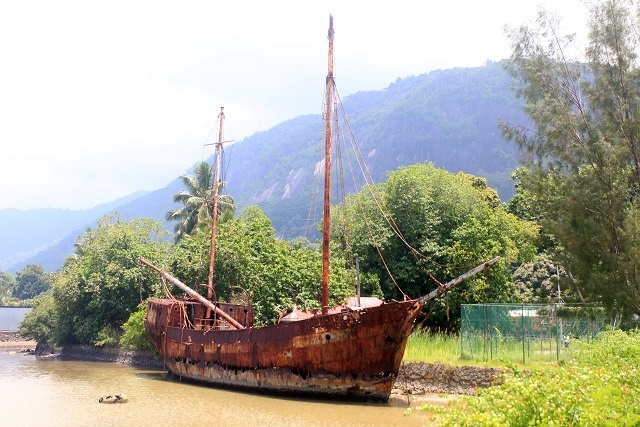 The dilapidated schooner is soon to be restored to its former glory. (Joe Laurence, Seychelles News Agency)

(Seychelles News Agency) – The ‘Isle of Farquhar,’ a three-masted schooner that is currently in a dilapidated state, is soon to be restored to its former glory, according to its owner.

The vessel, built in 1909 by a company in the north of the Netherlands, has been moored for more than 40 years at Les Mamelles district in the east of the main island Mahe.

The current owner, Philippe Boullé, told SNA that the plan to restore the ship is already in full swing.

Boullé said he purchased the schooner to prevent it from being demolished as it has a personal historical connection.

The vessel located next to a basketball court was supposed to be demolished in 2004. The Ministry of Environment and Natural Resources felt that it was an eyesore and unsafe for people and children who travel through and play in the area.

“I made my last voyage on the ship, and it was caught up in a vehement cyclone for two days,” Boullé said.

He added that “I remember the fateful day, the giant waves were rolling unstoppably, the captain had to abandon ship, and all passengers were readying themselves to jump overboard. It was a miracle that the boat did not sink along with its passengers.”

Curious as to why the Isle of Farquhar did not sink, Boullé did some research.

“Usually when there is a cyclone, it is the broken masts that sink the boat, but this one stayed solid because the boat was entirely made of steel. Then again, if you look at the ship, it has incredible features, set for the roughest seas. The ship was built in the Netherlands, which was at that time dominating the marine sector,” he said.

Boullé told SNA that “it is the only ship that has sailed the Indian Ocean which has its name pegged in the international registry of historic ships. It also has a picture of it in the Swedish maritime museum.”

After World War II, the ship was bought by Mauritians, and in 1950 under the name ‘La Perle’ it was used as a mothership for fishing dories (a type of fish with mouths that can open very wide) in the Mauritian waters.

It also has a historical link to Diego Garcia, the largest island of the Chagos archipelago in the Indian Ocean. In October 1971, it was used to carry the last of the plantation workers forcibly evicted when the U.K.leased Diego Garcia to the U.S. to be used as a military base in 1960.

The historian at the National Archives, Tony Mathiot, said that the vessel has some incredible history in the waters of Seychelles, a group of 115 islands in the western Indian Ocean.

“It was used to transport people, copra and merchandise to other islands, namely Agalega, Diego Garcia and Farquhar,” said Mathiot.

He added that the schooner was later sold to Paul Moulinie, who was known as one of the biggest landowners residing on Praslin, the second-most populated island of the archipelago.

“After that, the boat was sold to a foreigner, and there were rumours that a restaurant was to be built, but the plan never materialised,” Mathiot explained.

A person who once travelled on the ship, Marise Eulentin, told SNA that she was still a “child when she embarked on the ship for Agalega (two outer islands of Mauritius).”

She added that: “My mother was the one who recounted the story of my voyage to me. She was 22 years old when she was travelling. It took us around one week from Mahe to get to Agalega.”

Eulentin said, “I remember her saying that the captain of the vessel was someone who goes by the name Brike. When we returned to Mahe, she had already given birth to my two little brothers.”