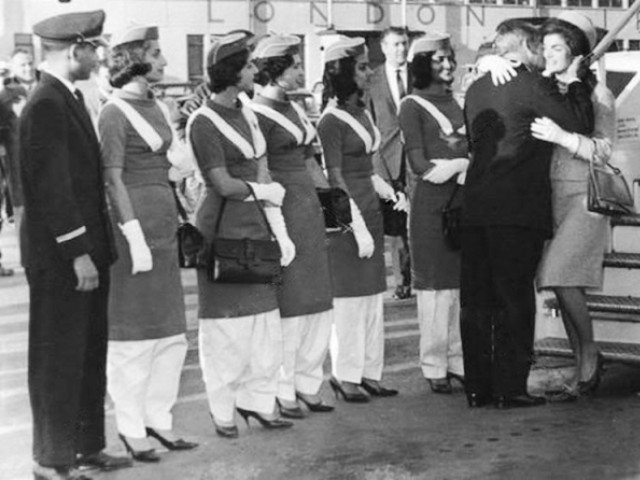 In this picture, you can see Jacqueline Kennedy disembarking a PIA carrier in 1962. PIA was her favourite airline.

This is not an account of a plane crash. Rather, it’s about a whole airline company coming crashing down; an organisation which has completely lost direction. Pakistan International Airlines (PIA), once soaring high in the skies of the aviation industry, has fallen into an abyss of financial and image crisis.

So this is an account of our national flag carrier that used to be the nation’s pride; it is about Pakistan International Airlines.

I still remember the time when PIA was one of the few things we could talk about with our heads held high. We felt pride not at the condition of the age-old planes or technology; not at the in-flight entertainment system or even the food. It was not pride in the basic comfort and facilities provided. Rather, this pride, was for the people working in PIA – the quality and finesse of the pilots, the expertise and competence of the technical staff and engineers, the knowledge and capability of the cabin crew, and of course their grace and beauty.

My aunt was a PIA air hostess and I remember the awe she struck when she entered the house after coming back from a flight; in her sleek uniform with that trade-mark ‘dupatta’ on her head, looking absolutely  exquisite and thoroughly graceful. Well-educated, cultured, intelligent and service driven – these were some of the qualities that were synonymous with the majority of PIA’s crew and staff.

My father was also part of the travel and airline industry and the fascinating stories he told me about PIA’s performance during the mid-1960s and early 1980s, always made me wonder. Sadly, today many of those stories might sound unreal.

A glimpse of the past

My father would tell me about Air Marshal Nur Khan, Managing Director of PIA, under whose exemplary leadership there were frequent surprise checks in the odd hours of night or early morning. He would personally check, not just the aircrafts but also other minute details such as the cleanliness of the staff’s uniforms and the condition of the check-in counters. The image of PIA, as the national flag carrier, was taken very seriously.

PIA made it compulsory for these passengers to be presentable and be properly dressed, as each of them was an “ambassador” of Pakistan. At times, had to report several hours prior to departure at the Karachi airport, where the sales manager would take them personally in shuttle buses to “Lunda Bazaar” and each would be bought a set of dresses, mostly suits, for them to change into before boarding an aircraft to London.

I still remember when PIA began to help set up a new airline for a country known as the United Arab Emirates (UAE) where I used to live,  in the mid-1980s. I read in the newspaper that PIA pilots and engineers were training and grooming the staff of this new airline called Emirates and I still recall the pride I felt at being a Pakistani.

It was fascinating to learn that in 1975, PIA selected its new uniforms through an open competition. The winning entry was designed by Sir Hardy Amies, the designer of Her Majesty, Queen Elizabeth II. The very fact that designers like Sir Amies and Pierre Cardin considered it prestigious enough to attach their names with PIA is heart-warming and heart-breaking at the same time.

Famous Hollywood stars Ava Gardner and Stewart Granger arrive at Lahore Airport, 1954. The actors arrived in Lahore with a

full filming crew to shoot a major portion of the film ‘Bhowani Junction.’

The road to decline

Growing up in Dubai, I saw the emergence of Emirates Airlines over the years as one of the best airlines in the world, winning numerous global awards and establishing itself as a multi-billion dollar profit-making brand with one of the largest and most modern aircraft fleets.

I gradually felt my loyalties shifting towards Emirates and at the same time felt guilty for choosing it every time I had a choice. Honestly, I felt like a step-son when travelling by PIA – losing my luggage, eating tasteless food or staring at a TV-less seat in front of me during the entire journey, despite paying the same or higher air fare. On the other hand, increasingly I noticed that Emirates did not compromise on beauty, service or the grace of their crew.  As PIA continued on its downward spiral, I felt it was too much to ask for loyalty.

With the decline in service and quality, PIA got trapped into endless scandals and losses, not just in dollar value but in goodwill and reputation. It’s hard to believe that the airline that was Asia’s first to acquire a jet plane in its fleet back in the 1960s, has fallen behind all its peers in the race to upgrade, update and improve its image.

How does one explain that the first Asian airline ever to receive maintenance approval by the US Federal Aviation Administration (FAA) in the past has been banned by the European Union in 2007 based on safety concerns for its aging fleet?

Who would believe that the first airline ever to show in-flight movies on international routes and to use the first computer ever in Pakistan, would someday lose its customer base because people would perceive it as archaic and out-dated.

Although there is a lot of information on the reasons for PIA’s downfall, I would rather not quote boring statistics. For me, all those negative numbers and record losses are merely a symptom and not the cause. The recent incident of a PIA pilot being arrested at Manchester airport for being drunk was an all-time low in the history of an organisation that has a glorious past.

Any iota of pride that Pakistanis had for its national carrier or its highly responsible and competent pilots was snatched away, thanks to the son of some military general with a few bad habits. Even if there were any loyal souls left in the European countries where PIA flights cannot land, who were trying to convince foreigners that banning PIA is unfair and based on unfounded fears, they would surely be eating up their words after this incident.

How do you explain the stupidity of one person which puts the safety standards of the entire organisation at risk? This incident, along with the case of the three stewards who were arrested on charges of harassing a female passenger, might be among the few instances that came to light. There may be many such things that go unreported on a daily basis. Sadly, such instances are merely a reflection of the low self-esteem of the people attached to an institution that lost its esteem years ago due to corruption, poor judgement, weak decisions and above all, complacency.

A Strategy and Business Transformation Manager for one of the leading banks in the Middle-East. He lives and works in Dubai. A literature lover and a writer by hobby he mostly writes fiction inspired by true life events.

The views expressed by the writer and the reader comments do not necessarily reflect the views and policies of The Express Tribune.

Confucius Quotes (Author of The Analects)