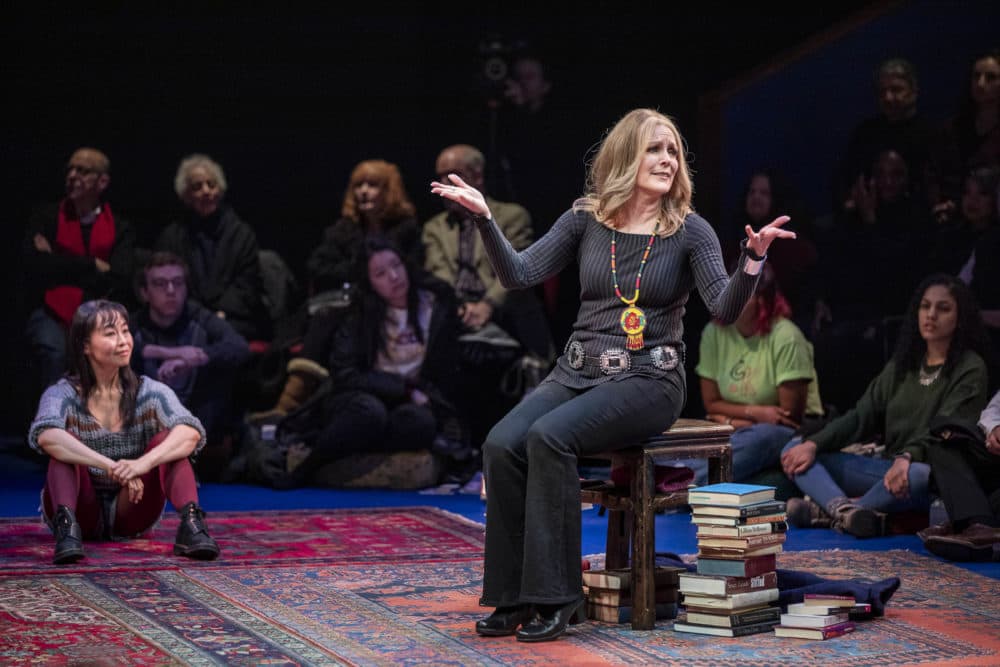 “Gloria: A Life” at American Repertory Theater in Cambridge tells the story of American second wave feminism through the eyes of an icon. But the play also tells the story of the women in the audience, who are invited to share their experiences during each performance.

A.R.T. artistic director Diane Paulus directed the play, written by Emily Mann, for its original run off-Broadway in 2018. Now she’s brought it home, and Gloria Steinem, played by Patricia Kalember, is joined by an ensemble cast portraying the women she partnered with in the decades-long fight for equality.

Because her name is practically synonymous with that era of the women’s movement, much of the audience was surprised to learn that Steinem was 35 and working as a journalist for years before she considered herself an active feminist. What brought her to that point? Experience.

As her character says in the show, by 1970, the women’s movement was “really taking off,” but she couldn’t get any articles about it published. “A couple of editors tell me ‘if we publish your article saying that women are equal human beings, then we have to publish an article right next to it saying women are not equal in order to be objective.’”

The audience laughed, but the consequences of these attitudes weren’t funny. As we learn in the play, at this time it was considered justifiable homicide in some states if a man killed his wife for cheating. And a woman couldn’t even take out a credit card in her own name. Hearing stories from other women and learning from seasoned civil rights activists awakened the feminist in Steinem.

“I think this story demystifies Gloria the icon and in that sense it makes space for all of us to recognize ourselves in her,” said Paulus. She and the designers created a space that would foster listening and sharing by arranging the audience in a circle around a modest, cozy set filled with books and ottomans, meant to evoke Steinem’s living room.

With each performance, the A.R.T invites the audience to join the conversation. Act I is the main play, and tells Gloria’s story. Act II is a talking circle where the cast facilitates an audience conversation about what they just saw, and how they feel about feminism’s past and future.

“The lights often stay up on the

audience so that we are present. We are listening so really the movement into Act II, which is the talking circle, feels completely organic and an extension of the whole show,” said Paulus.

When I saw the show last week, some people in the mostly white audience shared that they didn’t know the names and stories of the activists of color who taught Steinem and worked with her for years while the mainstream media ignored their efforts.

Audience member Janet Kolodner says she loved that the play humanized a movement that was for years clouded by stereotypes and misinformation “I was really surprised. I didn’t know,” said Kolodner. “And I was around, I was aware, and I should have known that it was women of color who were playing a big role in getting it started also.”

Women like Dorothy Pitman Hughes, who founded Ms. Magazine with Steinem in 1971. Or Wilma Mankiller, who in 1985 became the first woman to serve as the principal chief of the Cherokee Nation. Or civil rights lawyer turned organizer Flo Kennedy. “Some people say they won’t work inside the system,” Kennedy says in the play. “They’re waiting for the revolution, well when the ramparts are open honey I’ll be there, but until then…the biggest sin is sitting on your ass.”

People in the talking circle shared their gratitude about how far we’ve come toward a more equal country, while others expressed their anxiety over what they view to be a backlash. Nearly everyone who shared expressed that they felt a call to action, like audience member Eileen Cerne. “It was very consciousness raising, in terms of how every one of us has a responsibility to get out there and do what we can.”

Paulus told me that’s exactly what Steinem hoped for when she decided to share her story in this format.

“I know for her the only point of revisiting her life was to be able to share it in a way that would give courage to everybody who comes to see this to say my story has value, my journey is a process, and it’s never too late.”

‘Flossie’, the little girl with Oscars glory in her sights